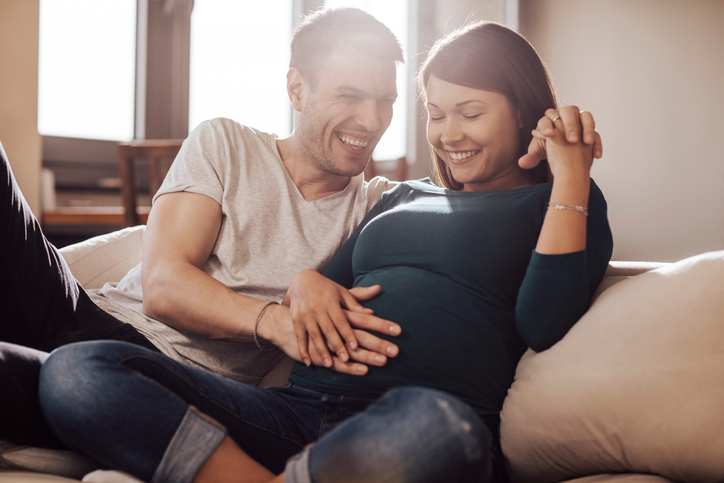 When Does Pregnancy Start?

This might seem like a simple question to answer, but it’s actually a little tricky to figure out where to start counting when you give the age of a fetus. In medical circles, there are two common methods used to give a fetus’s age – gestational age and fertilization age.

Gestational age refers to the amount of time that has passed since the first day of the mother’s last menstrual period. In most visits to a prenatal doctor, he or she will refer to the age of a fetus in gestational terms. Gestational age can be misleading, however, because it doesn’t give the actual age of the growing baby itself. In fact, gestational age can start up to two weeks before the moment of conception.

For purposes of convenience, the dates in this development guide use gestational age as a milestone. To determine when these milestones occur in terms of fertilization age, simply subtract approximately two weeks from our week by week pregnancy development guide.

The Stages of Pregnancy

Two Weeks After Your Period (Conception Day): Your pregnancy starts here! When the egg and the sperm come together in the fallopian tubes, they form a single-celled organism called a zygote. This zygote is microscopic in size, but already contains all the genetic information needed to create a new life.

As the single-celled zygote divides and grows, it becomes what we call an embryo. As the embryo gets larger it travels down the fallopian tube and eventually reaches the uterus about three or four days after conception. At this point, the embryo is about the size of a grain of sand.

Three Weeks: By now, the embryo is about seven days old. It will have traveled into and begun to implant itself into your uterus, creating recognizable pregnancy symptoms in your body. At this point it’s possible to detect pregnancy hormones in your blood through a blood test.

Four Weeks: Most pregnant women notice pregnancy symptoms at this point, especially their late or missed period. The embryo is now fully connected to your bloodstream and is growing rapidly. If you take an at-home pregnancy test at this point, it can accurately tell if you’re pregnant.

Five Weeks: The embryo is growing very fast and beginning to form internal organs such as a heart, lungs, and skeleton. You will probably feel many pregnancy symptoms at this point, like nausea, sore breasts, and tiredness.

Six Weeks: The embryo is now about ⅛ of an inch in size, about the size of a peppercorn. It now has a brain, spinal cord, and is starting to form arms and legs. You may notice increased nausea and morning sickness at this point, as well as some light spotting.

Seven Weeks: The baby’s circulatory system is almost fully formed, and it has begun to create its own blood inside its body. You’re probably starting to feel bloated, as your uterus is getting larger to make room for the baby and your body is retaining more water.

Eight Weeks: The embryo is now more than ½ an inch in size, about the size of a raspberry. Fingers, toes, elbows, and knees are forming on the limbs, and the embryo is able to move them in response to touch. You should schedule your first pregnancy check up with your OB around this time.

Nine Weeks: The development of the pregnancy keeps accelerating. By nine weeks, the embryo, nearly an inch in size, is as big as a cherry. Limbs, fingers, and toes continue to grow and are beginning to form hard bones inside. You may be feeling nauseous, more sensitive to smells, and bloated.

Ten Weeks: By this stage of pregnancy the embryo is rapidly expanding its nervous system, limbs, and internal and external organs. The baby can begin purposely moving its arms and legs.

Eleven Weeks: After about three months of pregnancy, we no longer refer to the growing baby as an embryo. Instead we use the Latin word fetus, which means “young one.”

At this stage, the fetus has all of its major organ systems in place and is beginning to look recognizably like a baby. It is about one and a half to two inches long – around the same size as a lime. The fetus can perform many familiar motions including yawning, sucking, and stretching. The eyelids are developed and closed to protect the eyes, and the kidneys begin to produce urine.

At this point, the baby’s organs are almost fully developed. Its development now mostly involves growing larger and practicing skills like moving, sucking and swallowing.

Fourteen Weeks: The fetus is about three inches long, somewhere around the size of a peach. It is growing fingernails and toenails, and the fetus can usually find its own thumb and suck on it in the womb. Fourteen weeks also marks the beginning of your second trimester. You’ll probably start feeling less tired and nauseous, may be hungrier, and have thicker, stronger hair and nails. This is why this time is often called the “honeymoon period” of pregnancy.

Sixteen Weeks: By four months, the fetus is about five inches long and weighs about four ounces – about the size and weight of a large avocado. The heart is beating very fast at this stage of pregnancy: about 110 to 180 times per minute (three times every second!) An ultrasound should be able to tell you if your growing baby is a boy or a girl. You may also start feeling the baby moving in your belly around this time.

Eighteen Weeks: The fetus is now nearly six inches long, the size of a large pomegranate. His or her skeleton is growing and hardening, and he or she can now blink, frown, and yawn. You may start feeling some aches and pains in your back and legs around this time, and you might also have trouble sleeping.

Twenty Weeks: You may be feeling the fetus move inside you regularly now, as it can easily coordinate its arm and leg movements to squirm and kick. It is about ten inches long, the length of a banana. He or she is also developing sleeping patterns, and some studies suggest babies at this age can respond to pain signals. This pregnancy stage also marks the approximate “halfway point” for the pregnancy.

Twenty-two Weeks: The fetus is about 12 to 14 inches long from head to heel, and weighs almost a pound (16 ounces). Hair is beginning to develop on the head and skin. You may notice extra hair growth on yourself as well, along with some vaginal discharge. Your belly is getting much larger now as the baby grows. Most doctors recommend eating a little extra every day, and overall you should be gaining a pound or two each week.

Twenty-four Weeks: The fetus weighs approximately 1.5 pounds (22 to 24 ounces) and is about the size of a head of lettuce. The face is fully formed by this stage, and it has begun to practice breathing by inhaling and exhaling amniotic fluid. Most fetuses at this point can also hear voices and other sounds from outside the womb, and it may begin to recognize your voice, breathing, and heartbeat. They can even be “startled” by noises applied to the mother’s abdomen.

Twenty-six Weeks: Fetal development is beginning to reach the final stages as the mother enters her third trimester. The fetus weighs about two pounds and is coming up to 16 inches in length, about the size of a large eggplant. The eyes are almost fully-formed and can respond to light, and the teeth buds are permanently in place for baby teeth to start growing. The baby is also growing eyebrows and eyelashes. You’re probably feeling tired, and may have trouble remembering things sometimes — a symptom lovingly known as “pregnancy brain.”

Twenty-eight Weeks: With the support of intensive care, many babies born at this stage stand a good chance of survival. The brain is developing the ability to regulate breathing and body temperature, and the immune system is starting to support itself. The most important stages of fetal development are finished at this point. From here, the baby mostly just grows larger. You might start feeling what are known as Braxton-Hicks contractions at this stage. These are “practice” contractions that get your uterine muscles ready for the process of birth.

Thirty-four Weeks: Fetal development is nearly finished, and the baby is preparing to be born. Many babies are extremely active in the womb by this point, and have developed reflexes including light, sound, and touch responses. The lungs are still in their final stages of development, so babies born at this stage may still need some assistance breathing. On average, babies at this development stage are about 17 inches long and nearly five pounds in weight. You’re definitely feeling tired and sore at this stage of pregnancy, and you’re also probably feeling pressure in your pelvis as baby presses down inside.

Forty Weeks: On average a baby at this stage is nearly 20 inches in length and weighs seven or eight pounds (though some can be significantly bigger). Most babies naturally position themselves head-down in the uterus and start to migrate down toward the pelvis in preparation for birth. It’s normal to feel anxious around this time, but remember — your baby will arrive when he or she is ready!

Due day: The typical “due date” is forty weeks after conception, but only about four percent of babies are actually born on their due dates. It’s not uncommon for pregnancies to go on a week or two after the due date. Your prenatal doctor may even recommend inducing pregnancy to make sure the baby doesn’t grow too large inside your womb.

It’s important to remember that every pregnancy is different, and your week by week experience may be different from that of other women.

If you’re scared or unsure about your pregnancy, you should call Lighthouse Pregnancy Resource Center. We have years of experience in helping women through the confusion and difficulty associated with an unplanned pregnancy. Text us today at 201-677-2394  to schedule your appointment. All services are free and confidential.